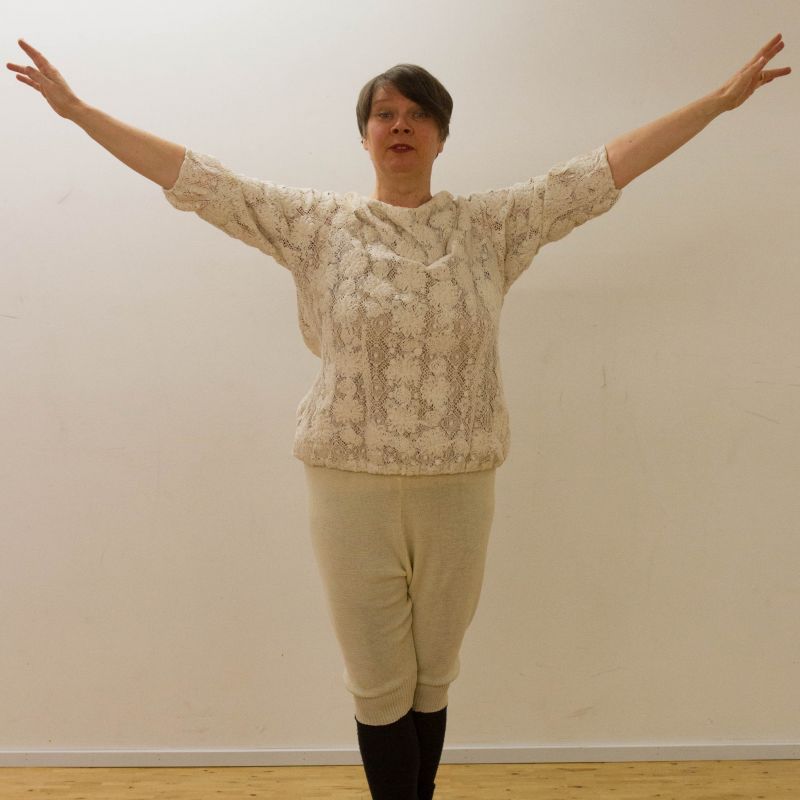 Annika Tudeer struggles with the classic in a humorous performance. The process that is depicted is no small journey, but a deep and many-faceted portrait of an artist. Annika does Swanlake is light, generous, funny and full of steel – like Annika herself. […] She is known as a forerunner, but what now? And what does re-newal mean? These days it is radical to make a performance about the relation to art, and to hold on to that, without security-nets or explanations. (Helsingin Sanomat, March 6th 2015)

Annika uses the ballet Swanlake as a framework for the performance and deals with the fact that the idea of turning Swanlake into a solo was not such a great idea after all.

My intention was to make a solo of Swanlake, very soon I realised that the template felt both stuffy and dated. However much I tried, I could not be too enthusiastic about the story of a young man that falls in love with a swan on his coming to age birthday. Yet I was drawn to Swanlake. The challenge to make something intimate of something on that grand scale was of course tiltillating. (Annika Tudeer)

Apart from Swanlake the solo consists of autobiographical strands and Annika returns to her life in literature- and gender studies in the 1990s, and to her experience of dance analysis and dance criticism.

Annika Tudeer founded the performance company Oblivia in 2000. She is a performer in and artistic director of Oblivia. After working as a dancer and choreographer in the 1990s, she graduated from Helsinki University with a MA in literature. Until 2004, she worked as a critic writing on new trends in dance and performing arts nationally and internationally. She is a founding member of the Performance Center in Helsinki and of Mad House, a production house for performance and Live Art in Helsinki. In 2014, she was awarded a 5-year artist grant from the Arts Council Finland.

Oblivia is an international performance company and a unique force on the Finnish performance scene. Oblivia merge the boundaries of genres and nationalities. The background of Oblivia’s members from Finland, Iceland and UK are in music, dance performance art and theory. The trilogy Entertainment Island has been touring since 2010 to great acclaim. At the moment, Oblivia is working on their series Museum of Postmodern Art. A work in progress of their recent work Ka-Boom was presented at Theaterdiscounter in June 2014 and premiered at the Helsinki Festival in August 2014. www.oblivia.fi

Festivaali-Discobar following on the 26th.

Talk with the audience following on the 27th in cooperation with