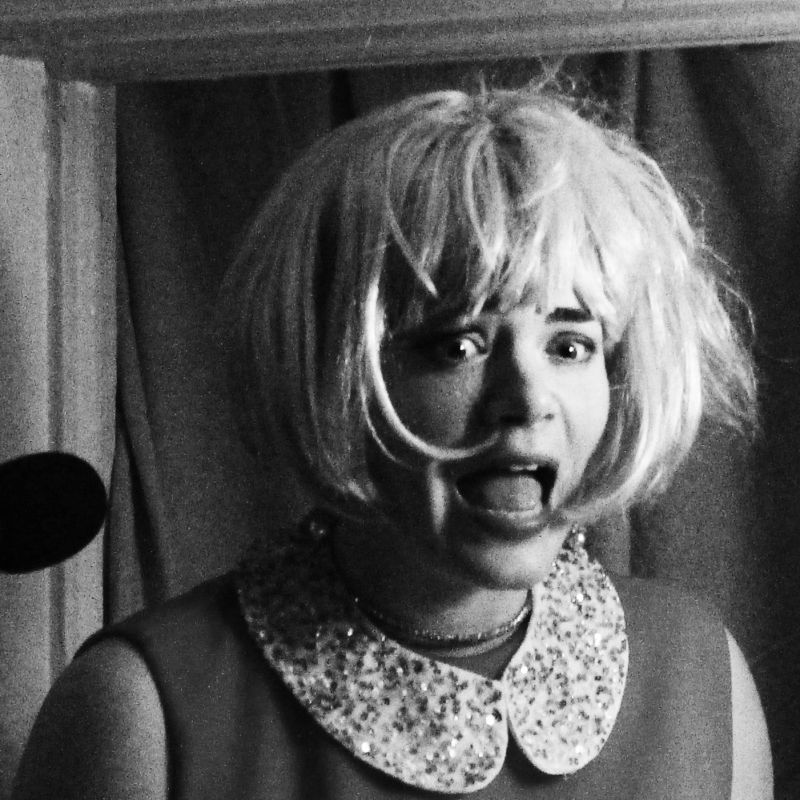 I’M DOING THIS FOR YOU (English version)

A big romantic gesture made by a woman for a man: Today is his birthday. He’s an aspiring stand-up comedian. The audience is her gift to him. It’s a surprise. And then he arrives! I’m Doing This for You is daring and uncomfortable and funny and a little bit sad. Through the course of the evening the event will evolve from an attempt of loving right to an exorcism, proving the only way out is going through it.

Our host is dressed up with a blond wig, an orange dress, shiny pantyhose and peep toe heels. She is covered in sparkly jewellery. She got her nails done. She is ready. But he is not there yet, and while we are waiting and drinking vodka, prepared to sing Happy Birthday, the nature of their relationship is revealed in layers. We witness a great non-love-love story that explores some of the extremes a person will go to in the name of eradicating her loneliness.

While she tries to write and re-write her own romantic narrative – the past and the future – the male part, played by a different local actor each night, won’t speak at all. After initially failing in the discipline of unconditional love, tonight, she wants to win him back and undo her terrible mistake – live, before our very eyes. But why is that when a man makes a big romantic gesture to win back a woman, he’s lauded, but a woman who does the exact same thing is deemed desperate and pathetic? I’m Doing This for You is about surprise in all its forms. There will be home-made cake. We will sing. And go home.

Haley McGee is an internationally acclaimed Canadian theatre artist based in Toronto. Her self-penned solo OH MY IRMA has toured extensively with performances in Edinburgh, London, Brighton, Kiel, Amsterdam, Tampere, NYC, Toronto, Victoria, Edmonton Ulaanbaatar, Varna, Peja and at Theaterdiscounter in Berlin in 2013. She has worked as an actor with many of Canada’s prestigious theatre companies, most notably her role Stan Douglas’ live film noir project Helen Lawrence presented among others at Munich Kammerspiele. Now in 2015 she is back in Berlin with the German premiere of her second solo piece I’m Doing This for You.

Mitchell Cushman is a Canadian director, playwright, producer and founding Artistic Director of Outside the March. He is also the Co-Creator of BRANTWOOD, Canada’s largest immersive musical theatre experience. As a director, Mitchell’s work has been seen on stages as large as the Royal Alexander Theatre, in spaces as intimate as a kindergarten classroom, and in locales as remote as Whitehorse and Munich. He has received numerous distinctions for his theatre work, including two Dora Awards for Outstanding Independent Production, the Siminovitch protégé award, the Ken McDougal Award, and the Toronto Theatre Critics’ awards for Best Production and Best Director (Terminus). Mitchell is a graduate of the University of Alberta’s MFA Directing program.