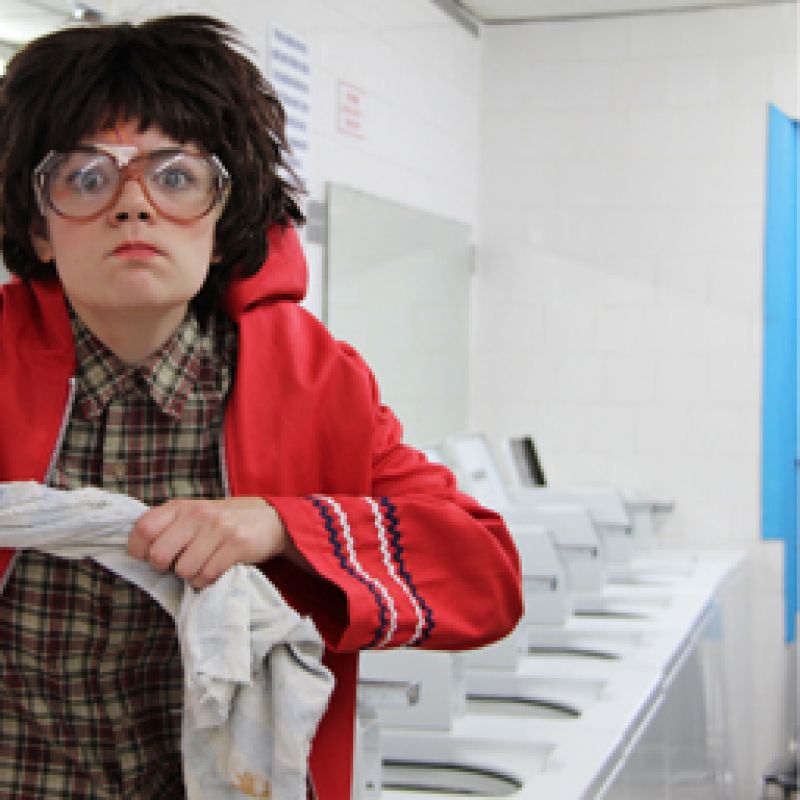 “Yes, I did it! But it wasn’t my fault.” An odd young woman finds herself before an audience. Her knees are bruised and there’s blood on her hands. She set out to solve a crime and ended up committing one of her own. OH MY IRMA is her breathtaking story.

Awkward, frail, beautiful powerhouse OH MY IRMA is a solo show written and performed by “fearless raw young talent” Haley McGee. This twisted funny confession from Canada has picked up awards at festivals throughout the world, including New York, Amsterdam, Germany and Kosovo.

Meet Mission Bird, a socially inept but insatiably curious young woman, covered in blood and strange battle wounds, wielding her suitcase as a weapon, shield and soapbox. Walking the delicate line of excitement and sorrow, Mission Bird cajoles the audience, luring them into her twisted and charming world. Determined to discover why Irma died, she followed a trail of laundry to a man’s apartment, but everything goes awry when she encounters his dog – his very fat dog. Suddenly, Mission Bird finds herself before us defending her irreversible and unnameable crime.

Storytelling at its best combined with breathless beat poetry OH MY IRMA explores the polarity of hilarity and despair, and delves into the question, when you do something irreversible, is love unconditional? For everyone?

Haley McGee is a Toronto-based actor and playwright. Most recently she has been touring her multi-award-winning, critically acclaimed solo performance OH MY IRMA internationally in Amsterdam (Jury Commendation - Fringe Festival), Kiel (First Prize - Thespis Monodrama Festival), New York City (Best Overall Production - United Solo Festival), Brighton, London, Victoria (BC) as well as in Mongolia and Kosovo (Best Actress – MonoAkt). As a playwright she was a member of the 2011 Tarragon Theatre’s Playwrights’ Unit and is a Writer-in-Residence at Theatre Columbus with whom she recently collectively created The Public Servant (GCTC Undercurrents). She has been selected to develop projects at the Banff Playwrights Colony and The Stratford Festival’s Writers Retreat. Theatre Columbus will produce a new play by Haley McGee in December 2013 at the Evergreen Brickworks, Toronto. Info www.ohmyirma.com


This performance of OH MY IRMA was made possible in part by a grant from the Ontario Arts Council's International Touring Program: