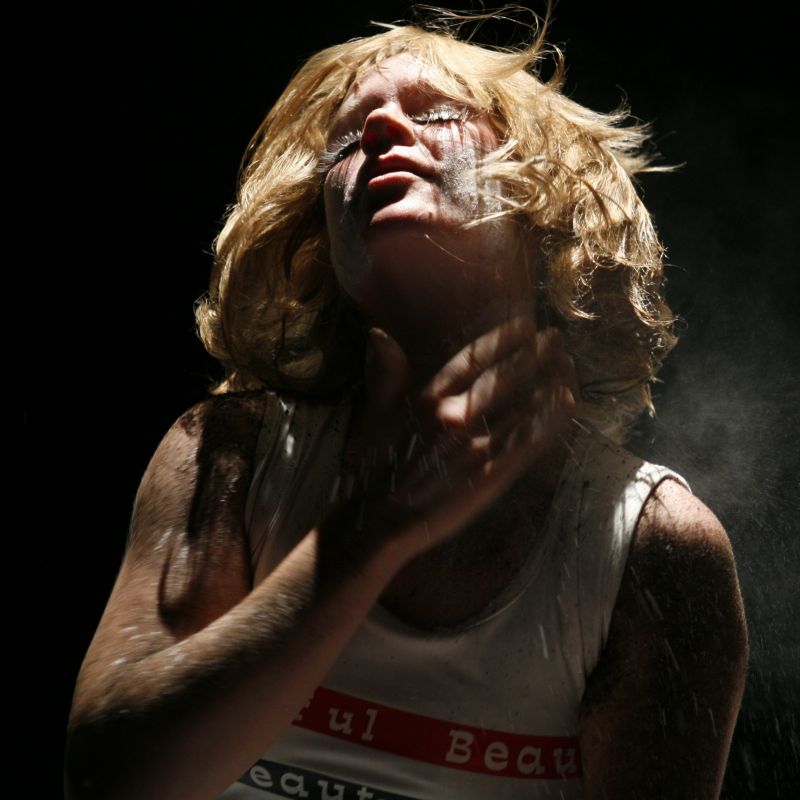 Meet Miss Goforit! As a cheerleader gone rogue the performer skates on the slippery surface of identity and conquers attributions to and demands on femininity and humanity with great humour. Following a script of movements the performer goes through 49 actions, 49 movements and a little shouting. The result is a positive yet critical culture of “shouting and moving”.

Maija Hirvanen’s choreographic performance is built around an unhinged female protagonist. ON ICE takes its creative cue from Hirvanen’s time as a cheerleader for the Turun Palloseura national league ice hockey team, while she was studying her serious art degree. Contradictory and absurd, the experience served as the basis of a solo performance created for Anna-Maija Terävä, centering on themes such as achievement, the act of gazing and the process of letting go. The subject matter is explored through a humorous perspective. ON ICE works like a comic strip that is made up out of episodes and associative images.

10 000 people are following an ice hockey game of the Finnish National league teams TPS and HIFK. I’m stepping on the ice with the other cheerleaders, with my very high heels. I clap my hands, Joan Jett’s version of “Shout” is played out loud, a smoke machine pushes clouds inside the light spectacle. The air smells of testosterone, cold beer and popcorn. I’m running on a feeling of strangeness. I’m here, now, but placed outside of myself, alone amongst others. I’m an object to look at. The audience hurrays when the players skate on the ice. I’m a black cobra. I’m inside a wrong skin. (Maija Hirvanen)

Maija Hirvanen studied at the Helsinki University of Arts and the Turku Art Academy. She is a choreographer and performance maker based in Helsinki, Finland. In addition to her solo and group performances, she has made collaborations and projects with other artists. Hirvanen’s works have been presented on stages, in galleries and museums as well as site specific. Hirvanen’s artistic interests in the broad sense have included relations of art and different belief systems, collaborative processes in cultural practice, performance as collective memory, performance and every day media as well as mechanisms of re-learning. ON ICE premiered at the Zodiak Center for New Dance in Helsinki already in 2009 and went on touring a number of European festivals and venues. Now in 2014 the piece continues being performed in a new edition that will give expression to the ideas that have matured over the past three years through visiting various stages and encountering different audiences.